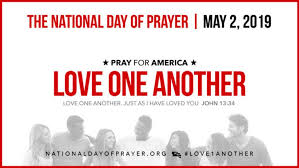 Today is the National Day of Prayer.

Prior to the Nation’s founding, the Continental Congress issued a proclamation recommending “a day of prayer” be observed on July 20, 1775. As declared in the general orders of George Washington:

“The Honorable the Congress having recommended it to the United States to set apart Thursday the 6th of May next to be observed as a day of fasting, humiliation and prayer, to acknowledge the gracious interpositions of Providence; to deprecate [to pray or intreat that a present evil may be removed] deserved punishment for our Sins and Ingratitiude, to unitedly implore the Protection of Heaven; Success to our Arms and the Arms of our Ally: The Commander in Chief enjoins a religious observance of said day and directs the Chaplains to prepare discourses proper for the occasion; strictly forbidding all recreations and unnecessary labor.” April 12, 1779

President John Adams declared May 9, 1798 as “a day of solemn humility, fasting, and prayer,” during which citizens of all faiths were asked to pray “that our country may be protected from all the dangers which threaten it”.

On March 30, 1863, President Abraham Lincoln issued a proclamation expressing the idea “that the awful calamity of civil war, which now desolates the land, may be but a punishment, inflicted upon us, for our presumptuous sins”, and designated the day of April 30, 1863 as a day of “national humiliation, fasting and prayer” in the hope that God would respond by restoring “our now divided and suffering Country, to its former happy condition of unity and peace”. He went on to say, “…it is the duty of nations as well as of men, to own their dependence upon the overruling power of God, to confess their sins and transgressions, in humble sorrow, yet with assured hope that genuine repentance will lead to mercy and pardon; and to recognize the sublime truth, announced in the Holy Scriptures and proven by all history, that those nations only are blessed whose God is the Lord.”

On April 17, 1952, President Harry S. Truman signed a bill proclaiming a National Day of Prayer must be declared by each following president at an appropriate date of his choice.

In 1982 the organization called the “National Prayer Committee” was formed to coordinate and implement a fixed annual day of prayer for the purpose of organizing evangelical prayer events with local, state, and federal government entities.

In his 1983 declaration, Ronald Reagan said, “From General Washington’s struggle at Valley Forge to the present, this Nation has fervently sought and received divine guidance as it pursued the course of history. This occasion provides our Nation with an opportunity to further recognize the source of our blessings, and to seek His help for the challenges we face today and in the future.”